Little Girl with the Striped Shirt

So you are the little girl with the striped shirt and barrette in your hair? Who's the man behind you (if that is you) with the glasses?

Hi Joyce,
So you are the little girl with the striped shirt and barrette in your hair? Who's the man behind you (if that is you) with the glasses?

Was it Ellis Fletcher Fry who was nicknamed Uncle Mose?
Do you remember who notified your family when he was killed? And also, was his death due to DDT? Aunt Norma seems to recall him being under the house spraying DDT or some chemical and dying as a result.
Is that the same memory that you have or news you're aware of surrounding what you heard? I mean, if you heard anything in particular about his death.
Norma says that Ellis F Fry still has a son living (she hopes!) named Robert James Fry. He was living in San Luis Obispo but I have not been able to find much on him so far.
I know he went to high school (age 16) in Cambria, California over on the coast. I found some yearbook photos of him. He would probably be in his 70s now. I have him being born in 1932.
Anyway, if you have knowledge about which Uncle was Uncle Mose that would help me out a bit.
Thanks!

The Uncle Mose I remember had a son whom they called "Bobby Jim"  He would be 80 if he was born in 1932 and that would be right because he was my age.  So, his father's name was probably Ellis F Fry.  He's the guy with the big cowboy hat in the picnic picture.  Bobby Jim is sitting on the ground between Jessie and I.  She is shading her eyes and I am to his left with the straight blond hair. 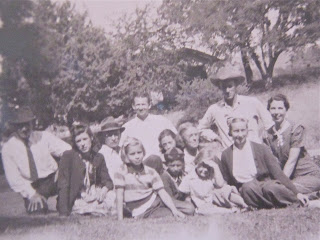 I'll get into more detail after the weekend.  Have a nice weekend and "Hi" to Aunt Norma.

I thought the guy behind me was Gramma Howery's husband, but that was only a guess.  I don't know those people on the right side of the picture.  I know Uncle Ellis has the cowboy hat.  Aunt Lorena has the scarf around her head and her husband Ernest is standing in the back with the big grin and a large round head.  He was from Germany and during the start of the war he almost lost his butcher shop because no one trusted a German.  His name was Gramaspacher, and had been married before and had 2 sons.  They, the sons,  seemed to be the only ones in the family who notified my mother of any deaths.


We had a lovely evening tonight.  We sat on my front lawn and watched the sun go down over the lake.  They are in bed, but I'm a night owl, soon to hit the hay.  I am going to go over the e-mails and try to answer all the questions I know the answer to.  Don't give up.  I'll get back to you eventually.
Posted by Levi at 1:06 PM